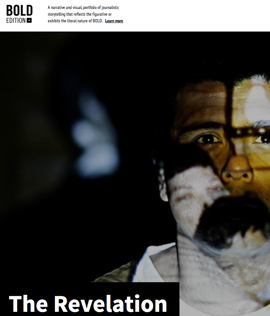 JULY 13,2011
On May 10th, 1983, Thomas de Witt and Margaret Ward received a late night phone call. The voice at the other end of the line said there was an older child available for adoption. The boy’s background was completely unknown—his real name, when he was born or even where he was born. The voice also declared they had until 10AM the next morning to decide if they would adopt the child. Twenty days later in Honduras, de Witt and Ward officially became the boy’s parents. They named him Nelson.

Sparse details related to their son’s history were not the only unusual circumstances regarding his adoption. de Witt and Ward’s FBI clearances—a necessary aspect of the adoption process—were expedited. They were provided a lawyer. The wife of the United States ambassador to Honduras, Mrs. Negroponte, shepherded the adoption. The necessity for a rushed delivery of the small boy to de Witt and Ward were never explained to them. When they left Honduras and touched down in the United States, the details were insignificant. Nelson de Witt was officially their son. 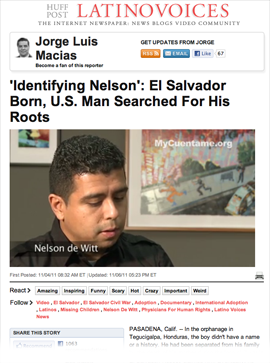 November 03,2011
PASADENA, Calif. — In the orphanage in Tegucigalpa, Honduras, the boy didn’t have a name or a history. He had been separated from his family by the death of his mother during the long civil war in El Salvador. Nobody claimed him. Eventually, he was adopted by a couple in Boston.
This is the story of Nelson De Witt, born Roberto Coto, removed as a 2-year-old child from his roots, his family and his native country.
Now, he has produced his own documentary, “Identifying Nelson,” to tell a tale that echoes the pain of many families torn apart by El Salvador’s 1980-1992 civil war. Some 70,000 people died and thousands more went missing, including hundreds of children who would be adopted by foreigners. 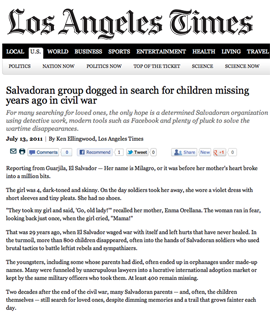 JULY 13,2011
For many searching for loved ones, the only hope is a determined Salvadoran organization using detective work, modern tools such as Facebook and plenty of pluck to solve the wartime disappearances.

Reporting from Guarjila, El Salvador — Her name is Milagro, or it was before her mother’s heart broke into a million bits.
The girl was 4, dark-toned and skinny. On the day soldiers took her away, she wore a violet dress with short sleeves and tiny pleats. She had no shoes.
“They took my girl and said, ‘Go, old lady!'” recalled her mother, Enma Orellana. The woman ran in fear, looking back just once, when the girl cried, “Mama!”

Starting in 2007 several members of the extended family started recording their thoughts and memories online for all to read. The blog features posts from Margaret’s adopted son, Nelson and his birth sister, Eva, but also has posts from Margaret, her son Derek , and other members of Nelson’s birth family, including his brother Ernesto, and his cousin Mireya.
http://www.anasmiracle.com

Margaret E. Ward tells a poignant and compelling story of an international adoption and the astonishing revelations that emerged when Nelson’s birth family finally relocated him in 1997.
http://www.missingmila.com

A non-governmental grass-roots organization founded by Father Jon Cortina in 1994 and based in San Salvador that searches for children who disappeared during the Salvadoran Civil War (1980-1992). One of four human rights organizations involved in the search for Nelson/Roberto.
http://probusqueda.org.sv/

PHR is a non-governmental organization that uses medicine and forensic science to investigate atrocities and human rights violations against individuals. It also advocates for human rights worldwide.  Based in Cambridge, Massachusetts, it was one of the four organizations that investigated Nelson/Roberto’s case and contacted the Ward/de Witt family in 1997.
http://physiciansforhumanrights.org